Wheel sizes don’t make very much sense; there, I said it. I wish someone had sat me down and told me that at the very beginning.

In this article, I’ll try my very best to explain what the common mountain bike wheel and tire sizing systems are, and how to understand them.

Before we get started, here’s a good indicator of how ridiculous wheel sizes are: can you guess what the C in 700C means?

That’s right, nothing at all. It remains as a carry-over from an old French sizing system, because, well, that’s the bike industry for you. We’ll cover this a bit more later on.

Thankfully, these days, we have ISO (formerly ETRTO), which gives us a number that looks like 30-584 on both rims and tires. We can use this to make sure the tire and rim are a good match for each other, and we don’t have to worry about fractions and decimals.

In this day and age, you can almost definitely get by with just a decent understanding of ISO sizing, so if that’s all you’re after, feel free to jump ahead to our ISO sizing section.

Which Mountain Bike Tire Size Should I Use and Why?

The most common question I receive regarding mountain bike wheel sizes is: which size is best to use, and why?

Thankfully, this is quite a straightforward line of questioning for wheel sizes, so we’ll get this out of the way early on.

For most people, 27.5″ mountain bike wheels are the best choice. They’re the de-facto standard today because they provide much of the benefits of the larger 29″ wheel, but with a fraction of the weight penalty.

To illustrate this, I’ve condensed the information that Giant Bicycles made available regarding 27.5″ wheels into this handy graphic that shows why 27.5″ gives you the best of both worlds: 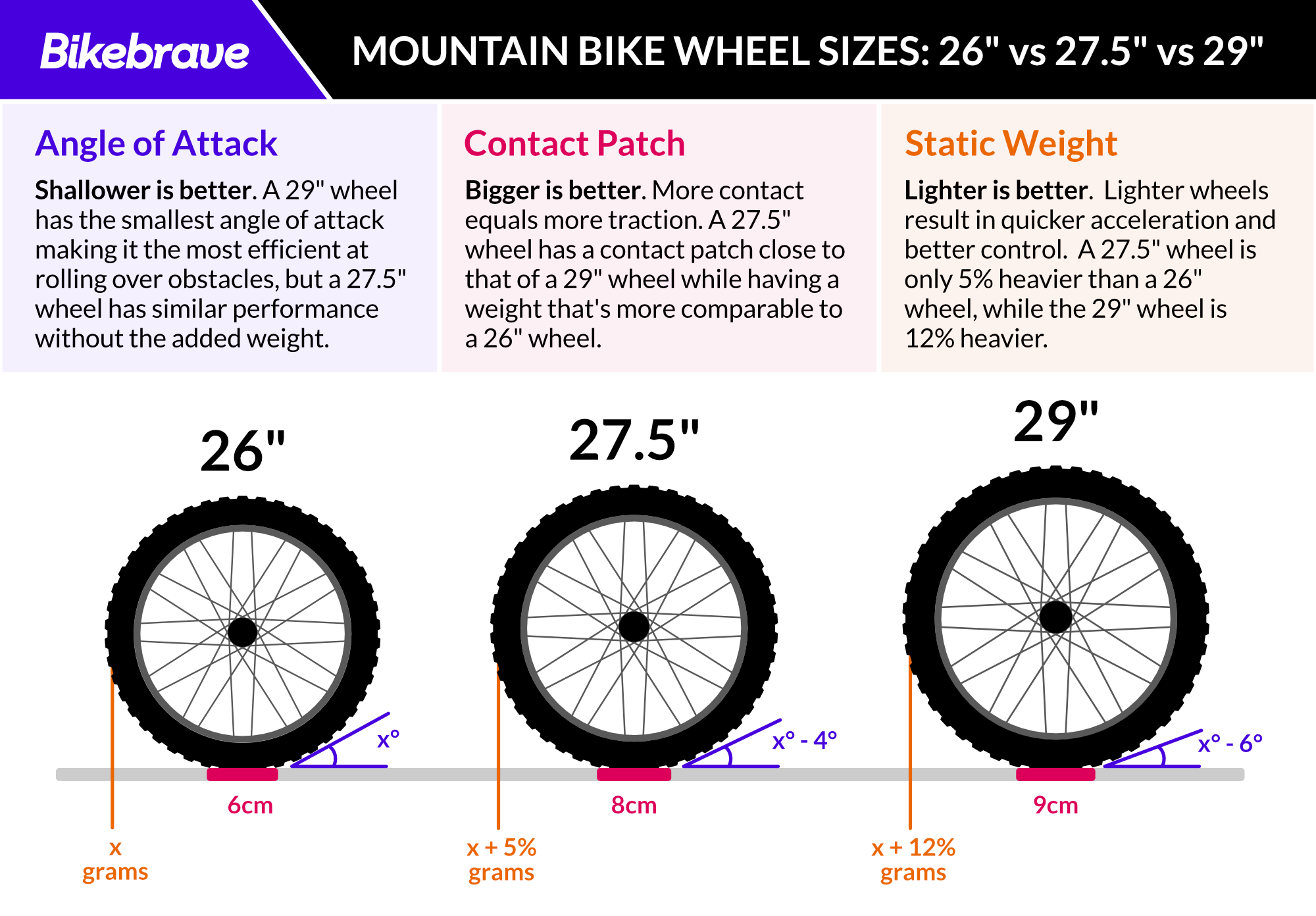 You can click the image above to open in a new tab.

The sizes you commonly see for mountain bike wheels, like 26in, 27.5in and 29in, all refer to the outside diameter of the wheel with the tire fully inflated.

These sizes can be thought of as a sort of shorthand for decimal sizes, each with a corresponding ISO measurement.

For example, wherever you see a wheel advertised as 26″, it’s almost always the equivalent to the decimal size 26×1.0 and has an ISO bead seat diameter of 559mm.

One of the first points worth drilling home is that these aren’t accurate measurements at all; they’re just approximations that are used as labels.

The true diameter of a wheel measured tire-edge to tire-edge will differ quite a bit depending on the rim width, the tire pressure, and plenty of other factors.

This inaccuracy is especially true of 27.5″ wheels because the name 27.5″ doesn’t derive from the diameter of the wheel at all. The term 27.5″ is more of a marketing label intended to show that they are halfway between 26″ and 29″ in terms of performance.

You might be asking yourself, “Why?! Why on earth would they do it like that?” and that’s a sensible thing to ask. At least I hope it is, because I ask myself the same question regularly.

In case the graphic above hasn’t done enough to quench your thirst for understanding, lets quickly touch on each wheel size and explain why and where they’re used.

As the saying goes, the great thing about standards is that there are so many to choose from.

So far, we’ve talked about standard size labels (26″), which are shorthand for the decimal sizes, and touched on French sizes (650B). But when it comes to measuring up tires and rims, there’s plenty more to worry about.

Before we go down the rabbit hole of the sizing systems, let’s count our blessings that most, if not all, modern tires and rims come with ISO sizes on them.

We’re going to look at ISO sizing first. Unless you feel like torturing yourself with understanding the other sizes and how they relate to each other, you’re almost definitely going to be ok by just relying on ISO.

ISO is the international sizing standard for bike tires and rims, and boy is it a lifesaver. Initially created by the European Tyre and Rim Technical Organisation (ETRTO), it replaces the other archaic sizing systems and removes all the overlapping and annoyances that come with them.

ISO sizing is the most intuitive, the easiest to compare, and the most commonly adopted sizing system today.

The following diagram depicts how ISO measurements are interpreted on bike rims. You can click on the image to open in a new tab. 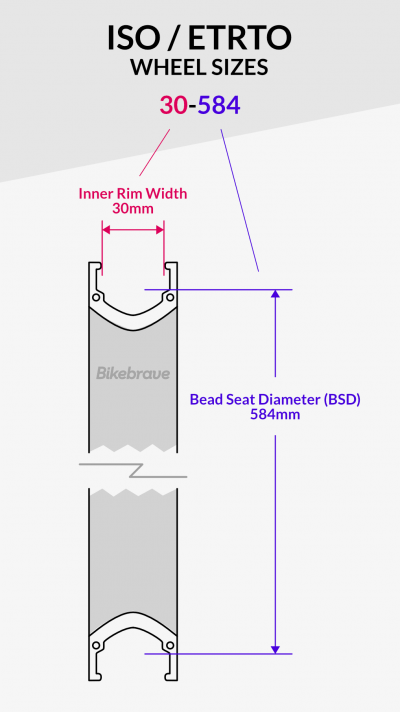 The ISO sizing system provides a measurement that looks like 30–584, which you’ll find on both rims and tires. Both numbers are millimeter measurements.

The first number, 30, represents a different measurement on tires than it does on rims.

The second number, 584, is universal between tires and rims. It represents the Bead Seat Diameter (BSD) in millimeters.

If the second numbers match on a tire and a rim, the tire will likely fit the rim (with a few exceptions related to dramatic differences in width).

If these numbers don’t match, there’s a very good chance it won’t fit.

While there are variants to each size, here are the most common ISO Bead Seat Diameter measurements for mountain bike wheels:

Sizes such as 700C and 650B come from an old French sizing system, where the number represents the outside diameter in millimeters.

The letter used to denote the width, though today, it is meaningless since you can get either 700C or 650B tires in varying degrees of narrowness.

Here they are in a table to make them a little easier to comprehend.

With mountain bikes, you’re mostly safe from fractional sizes, but it’s worth mentioning them for completeness.

It’s important to note that you cannot mix fractional markings with decimals.

Some key takeaways from this article:

Bikebrave is using cookies to help give you the best experience. Got it!